skip to main | skip to sidebar

"ignore the story. see the soul. remember to love. you will never regret it" --- Seane Corn

it's a jungle out there


My brain needs a break, so I'm playing along with the ever-optimistic Mrs. 4444 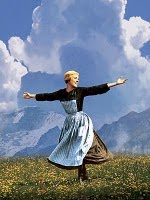 damn I love this movie
*****
OK. So my pantry sucks. Just ask my kids.
You can ask my babysitter, too.
She feeds my kids dinner 3 nights a week
I need to do something about my work schedule
My pantry contains 17 boxes of Barilla pasta
9 cans of Goya Black Bean Soup
4 boxes of Silver Palate Oatmeal
6 cans of Progresso Chickarina
and
3 packages of Oreos
2 packages of Chips Ahoy Chunky
the kids have to eat something, right? 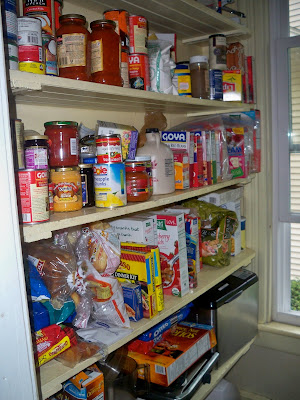 So. None of this stuff falls under the heading of favorite
yes, adrienne, that is Tostitos Salsa Con Queso
made with real cheese
what?!?
I regularly have a houseful
of 13 year old smelly boys
that real cheese just makes those boys smell
even better
the good new is I'm married to a chef
who occasionally brings home super special amazing things 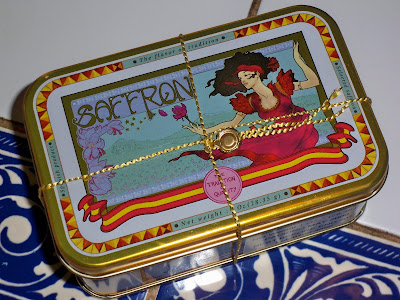 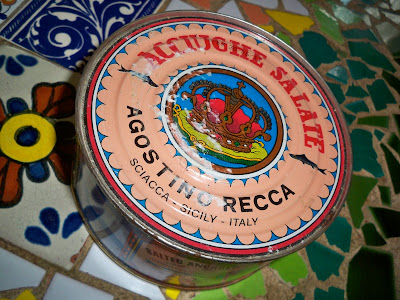 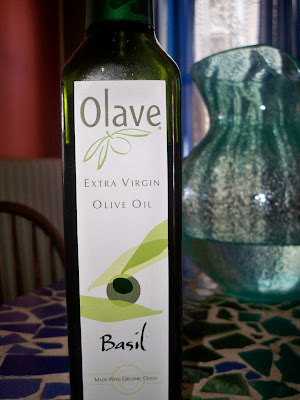 this, though, is my favorite pantry item
extra virgin
cold pressed
basil infused
organic
olive oil
from Chile
one of the few things I make that my kids actually eat
is bread salad
that basil olive oil on bread salad
in the middle of winter
is like a swoon inducing whiff of summer
yum
just ask Ty
who walked around in said swoon last Christmas break
with his nose pressed to the glob of homemade play dough
that he oh-so-industriously made
one morning while I was sleeping in
mmmm.... mommy smell the playdough I made...
it smells like basil from the garden
it sure did
Happy Pantries!
Posted by michelle at 8:27 AM 17 comments:

I kept waking up with heartburn.
I never have heartburn. Especially at night.
And heartburn that's so bad it's waking me up? NEVER
I kept waking up and thinking I should go get a Pepcid AC. And then I'd think this is ridiculous. I don't get heartburn. I'm going back to sleep.
And I'd roll on my side and fall back to sleep. Then I'd wake up from the heartburn again.
WTF?
At 7am my phone woke me up. A text from Sister Melanie.
Mommy says she wants to move on...
By noon we were all there.
Mia gave Her the pink fuzzy monkey she's been wanting to give Her all week, but kept forgetting in the car.
Which was OK with me as contact precautions had been put into place and nothing sticks to pink fuzz like C. diff.
Right tulpen?
Jacqui came in and said oh She found her pink fuzzy thing and pointed to the monkey Mia had balanced on her Grumsie's chest.
????
Jacqui said She kept asking for it last night. Kept looking in the bed sheets saying where's that pink fuzzy thing?
It's important. It needs to stay safe. It must have changed color...
Guess She knew there was a pink fuzzy thing in Her future.
She kept asking for the time. Asking how long before everyone gets here? What time is it now? How much longer?
There were a lot of people in that hospital room.
By noon we were all there. Sister Melanie got each of the west coast siblings on speaker phone. She was their Big Sister.
Five phone calls later and She had said Her good-byes.
She even said Her I love you-s. And each time She said it, the words came more easily.
Until finally, speaking to Her baby brother, She said the words first.
will wonders never cease
She searched all our faces as we huddled around Her hospital bed. Back and forth. Back and forth. Making sure we were all there.
She whispered something to Sister Melanie. I heard Her say communicate to Michelle...
She wants Ty to play Jesu Joy of Man's Desiring at Her funeral.
Sister Adrienne looked at me and said She does NOT have a tin can heart
Then She was ready.
The nurse stopped the IV meds that were keeping Her heart pumping. After a while they started a morphine drip.
We held Her hands.
And we waited.
Over the hours, we watched Her heart rate slow. Watched Her respirations slow. Heard them get jagged. Watched Her O2 drop.
We brushed Her hair.
And we waited.
They increased Her morphine.
We held Her hands some more.
And we waited
Around 11pm things got pretty raucous. We were cracking ourselves up remembering the wild parties thrown when we were teenagers and They were away on vacation. Who smoked what when. Who drank what where. Who did donuts at the top of the hill. Who answered the door when the police knocked. Who set fire to what.
Good times.
Then suddenly, at 11:25, we all got quiet. Like a gong had rung. The stories stopped. The laughter stopped. We were quiet. And waiting.
At 11:45 I collected Mia up from her napping place in the waiting room. At midnight Ty looked at the clock and said it's 12. At 12:08 I looked at the monitors and tapped Sister Adrienne on the arm. We all gathered close. Watched the blips. One breath. Watched the lines. No breath. Saw the zeros. No breath. Saw the red flashes. No breath.
pulseless
She wants Her ashes mixed with His and divided up so we each can sprinkle them in our gardens
pulseless
She wants Ty to play the cello at Her funeral
pulseless
She tried damn hard to hold out until Her 9th grandbaby was born
pulseless
but not so heartless after all
June 21. Summer solstice 2010
Posted by michelle at 2:37 AM 28 comments:

That goddamfucking song keeps going through my head.

Dr NewGuy biopsied her heart last week.
I know, right?
HEART BIOPSY... that's just crazy.
What's even crazier is that he's been looking at heart tissue for 25 years.
Head of the transplant team. And he looks at her crazy heart tissue and can't identify it.
He's never seen heart cells like her's before. So he had a pathologist from Mt Sinai look.
And this cardiac tissue special pathology guy in NYC has never seen anything like it either.
Of course
The Sisters don't understand how it's possible that the specialists HAVE NEVER SEEN THIS BEFORE
I say CAUSE WE'RE FUCKING FREAKS OF NATURE! but we already knew that
While he was doing the biopsy he told her your heart is like a tin can
Yup. She was awake. She watched little pieces of her tin can heart plunk in to a cup of water
eeek
Yesterday at work I was singing about crazy hearts in the halls between patients.
By the end of the day I felt all hot and hollow and empty and heavy.
Like the Tin Man or a hundred year old dented Can O'Beans left out in the sun.
I sent Bruce a text saying
I don't know if I'm feeling xtremely sad or xtremely guilty or both
The fresh ganesh on my back was a constant reminder on the drive down this morning.
Remover of Obstacles
The damn song kept popping into my head the whole way down.
This ain't no place for the weary kind It made my eyes leak pick up your crazy heart, give it one more try and my nose sting.
Crossing the parking lot I thought she'd really like that movie.
I don't know if she'll get the chance to see it this ain't no place to loose you're mind
I found her room in the CCU.
I looked at her with my leaky eyes and she looked at me and said it's not supposed to be this hard
and BANG
40 plus years of awkwardness and alien feelings and distance and discomfort melted away and I was just... me. And she was just her.
We were just two women in this moment in this life's experience and without thinking
I took her hand I remember being 8 and SO uncomfortable holding her hand and I looked at her and said
you're right its not supposed to be this hard. Your whole life it's been like this your body aches. I love you mommy.
46 yrs 7 months 2 days. And I said it first. And it was not hard

I'm going back tomorrow
Posted by michelle at 8:58 PM 15 comments:

we keep on keepin on


and I reply are you fucking kidding me? there's no way in HELL you'd wanna be me


and then we love some more

Eat it with a bite of ham

Newer Posts Older Posts Home
Subscribe to: Posts (Atom)
Your fairy is called Columbine Icedancer
She is a bone chilling bringer of justice for the vulnerable.
She lives in mushroom fields and quiet meadows.
She is only seen when the bees swarm and the crickets chirrup.
She wears lilac and purple like columbine flowers. She has icy blue butterfly wings.
Get your free fairy name here!

Jack, Ty, and Mia. They're yummy, they're crunchy, but sometimes they make me break out in hives.

words that stick to my ribs

"Is this a safe place to talk about our mothers?"
Michele Rene
"it occurred to me that the only real sin you can commit as a mother is to deny your children's right to be who they are and what they want to be and that the only real sin you can commit against yourself is to deny who you truly are and prevent yourself from being who that is"
Ms. Moon
"Sir! Excuse me sir!"
Laura
"Don't ask me why that thought never occurred to me before then, but for some reason, in that moment, my perspective changed."
Em
"Part of the deal I chose, I guess."
Nie Nie
"My heart cracked open and for a few minutes, she became mine"
Lizdom
"...every single fear I have about failing as a mother comes up from my bowels and heart and out of my mouth and eyes..."
Maggie May
"...we are careful with our magic, and we wrap it in paper to keep it safe."
Miss Maybelle
"Shine your light, motherfuckers!"
Sarcastic Bastard
"we're all trying to find a nice comfy place to cope. someplace not too scary and not too safe."
Jordana
"Don't worry. It's going to be ok. It's going to suck. You'll be smashed to smithereens. You'll be built back up again. You'll be more YOU than you'd ever imagined. It's going to be ok."
Cristin
"abracadabra is from the ancient hebrew 'avarah k'davarah'... what i speak, i create."
Adrienne
"You are both damned and saved, all the time, in every moment"
Scott

just spit it out