skip to main | skip to sidebar

"ignore the story. see the soul. remember to love. you will never regret it" --- Seane Corn

it's a jungle out there

It's 6:02
The boys tell me The Rapture is coming at 6pm
Eastern or pacific?
Eastern cause America rules
Sarcastic brats
They booked a trip to Disney World
Just in case

Early that morning the texts started coming in.
Sisters, friends, my realtor, my student.
A Happy Mothers Day Michele from someone who is not a mother but holds a particularly special place in my heart.

Mid-day I thought about my mom and my eyes started leaking.
She was here last Mother's Day.
I don't remember what we did. I don't remember if I saw her. Or called her.
Sisters what did we do?

Then late in the day I see this on my porch. 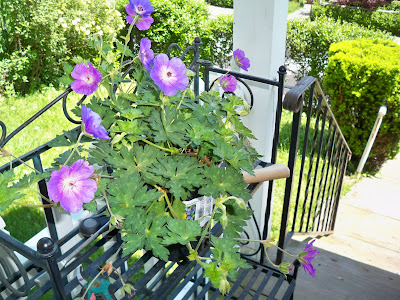 And I have no idea who it's from

Let me tell you, this beautiful geranium wreaked havoc with my progesterone filled brain. Between who I wanted the damn thing to be from and who I was worried it was from I ended up a sobbing mess rescued by the strong mama arms of Yogini Shannon.
Sobbing mess.
Like train wreck sobbing mess.
Damn ovaries. Damn Mother's Day.
*****
Flash forward to this week.
Turns out the Nervous Breakdown Geranium was from Andrew's grandparents.
Andrew is my 4th child.
Best friend to Jack. Big Bro Pal to Ty.
Destined to be one of Mia's husbands. ssshhh... don't tell them I said that
He pretty much lives with us. He's awesome.
As are his grandparents.
They brought me flowers on Mother's Day and left them on the porch.
The flowers were not from whom I wanted nor from whom I feared.
They were, however, from those who truly appreciate my mama qualities.
And that's all it's really about.
Right?
So today, the first sunny day in forever, I planted the geraniums in my lovely garden.
I thought it appropriate to sprinkle some Ashes in the hole.
mix my ashes with daddy's and divide them up and sprinkle them in your gardens
one of the last things She said to us
That's what She wanted. That's what She got. 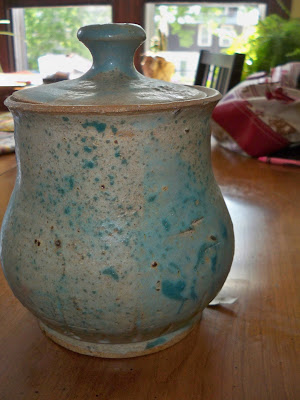 Fine powdery dust with some hard chunks kept in a jar She made when She took up pottery. 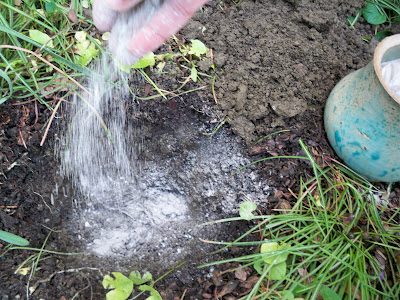 No ceremony. No ritual. Just my knowledge and remembrance of this particular Mother's Day mixed with the soil and ashes to feed the roots of the 2011 Mother's Day Nervous Breakdown Flowers.
I sprinkled the ashes.
I looked at the powdery dust on my hand.
I put my fingers to my face and took a deep breath IN.
I felt the dust on my lips and nose.
It tasted a little bit salty. 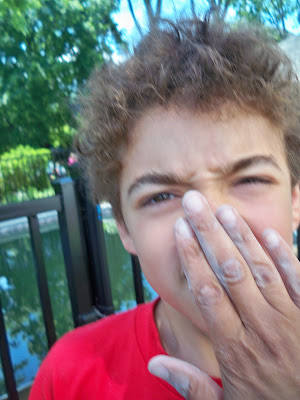 Then I called Ty 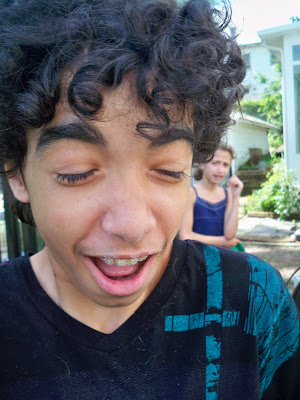 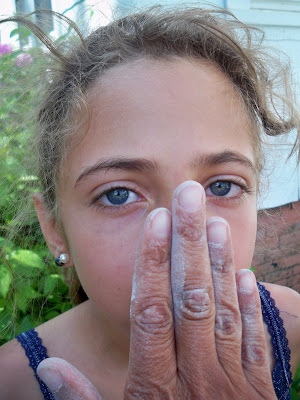 and Mia
And made them all breathe in the ashes of their Grums and Gramps.
Redemption.

or sanctuarily chaotic
or both
I'm still here. We are still here. All is good. Just insanely busy.
I don't have anything particularly mindful or illuminating or funny to say.
Just hello
And I miss you all. I haven't even been visiting, there's so much going on.
But it's all good.
So much to do here.
There are still 4 baskets of clean clothes that were moved from the pink and purple house a month ago and have yet to be folded and put away.
I guess maybe they're not too clean anymore.
Ah lah
But drawing a Giant Dancing Ganesh on the living room wall and wandering in and tending my new beautiful garden is more important than clean clothes.
Or grocery shopping for that matter.
bad mommy
Still it's all good
I love my new home. It's beautiful. It's becoming Home. It's Coming Home.
The kids love it.
There are at least a million of them here all the time and every one is happy.
Yogini Shannon and Jordana are right around the corners and I get to see them all the time. Some big wig psychiatrist at Stanford wrote an article that said when we women hang together it increases our serotonin levels and helps us live longer and a daily dose of girlfriends is just as important to our health as exercise and a good diet.
So there you go.
I bet visiting blogland has the same effect as having coffee or wine or lunch with our sister-wives/girlfriends. I know it makes me smile and lifts me up. I wouldn't stop blogging anymore than I'd stop my Prozac.
And that's saying a lot.
It's been raining for 10 days straight and everything's crazy green.
There's a promise of sun today so I'll make another promise of picts tomorrow.
xoxoxo
Posted by michelle at 7:49 AM 11 comments:

Disclaimer:
This is only the opinion of the author.
The events are fictional and names have been changed.
The author has her head up her ass and does not fact check.
These are her opinions.
thank you
*****
I wrote this yesterday morning, on my Crackberry, in between patients, to prevent my head from exploding after hearing snippets of news reports on my way to work.
Ovarianly speaking, this is the wrong time of the month for me to be dealing with anything more than peanut butter and jelly sandwiches or how to manage your kid's allergies.
I had an early morning text rant with Sister Adrienne and told her I was posting, but by the time my 12 hour day was done, I was tired and I had the feeling more blah blah blah had hit the airwaves so my original post might be old news.
But here it is.
I'll catch up today, and maybe I'll need to rant some more depending on what I hear.
Or maybe I'll just post picts of my new house.
The original title was Something Stinks So Bad I Think I'm Gonna Throw Up
*****
At 8:02 this morning I got a text from Jack
osama died last night
me: Wait. WHAT?
Jack: obama made an announcement last night

So on the way to work I tuned in to my beloved Amy Goodman for her leftist pinko commie view on the newsworthy events of the day. Her show ended and I switched to NPR for more info.

Bin Laden's ummm...demise.... was alternately referred to as his death or that he was killed by navy seals

Death?
Killed?
As in natural or accidental?

Can anyone say assassination?
I asked Sister Adrienne if there were too many s's and she said no just too many asses.
All I'm saying is call a spade a spade goddammit

Oh. Right. Asassination violates our Constitution or U.N. rules or something.
haha look at that if I leave out the punctuation it's unrules

All the liberal pundits talked about the threat of retaliation, the war on terror is not yet over, Americans have gathered and are cheering at Ground Zero and in D.C. and blah blah blah
Are you fuckin kidding me?

Like I said, call a spade a spade people

War is a money maker plain and simple.
It has nothing to do with morals or human rights or protecting democracy or any other lofty ideal.

It's certainly not in the name of god. Whichever name may that may be

For forever and a day humans have waged war for land and what that land holds
gold
diamonds
fertile land
Its about money
Its about contracts
Its about oil and other natural resources.
It is NOT about preventing crimes against humanity or preservation of democracy
It's about that element that was NOT on the periodic table a million years ago when I took chemistry but it starts with a c
as in congo
and is required for all computer chips from our cell phones to our desktops and who knows what else. It's probably in at least a dozen gadgets and gizmos in my own home that I tell myself are a necessity but god knows are just a luxury.
I am complicit too
That's all there is to it

Oh. And I love the part about Bin Laden being buried at sea.

Seriously?
There's just so much shit smell here I can barely breathe
Crazy Dr. Arlene explained last night that the buried at sea thing was so there would be no shrine.
I said what about tissue samples? DNA? Forget photos.
She laughed and said they should have buried him in the middle of Israel then they wouldn't have to worry about a shrine.
She's a hot mess and cracks me up.

*****
Addendum:
Jack is filling me in as I post. He said they wanted him captured to be tried for war crimes bullshit or dead yup.
He's a pretty reliable source. I'd rather get my info from him than the New York Times. That rag sucks.
just sayin'
Posted by michelle at 6:35 AM 16 comments:

Newer Posts Older Posts Home
Subscribe to: Posts (Atom)
Your fairy is called Columbine Icedancer
She is a bone chilling bringer of justice for the vulnerable.
She lives in mushroom fields and quiet meadows.
She is only seen when the bees swarm and the crickets chirrup.
She wears lilac and purple like columbine flowers. She has icy blue butterfly wings.
Get your free fairy name here!

Jack, Ty, and Mia. They're yummy, they're crunchy, but sometimes they make me break out in hives.

words that stick to my ribs

"Is this a safe place to talk about our mothers?"
Michele Rene
"it occurred to me that the only real sin you can commit as a mother is to deny your children's right to be who they are and what they want to be and that the only real sin you can commit against yourself is to deny who you truly are and prevent yourself from being who that is"
Ms. Moon
"Sir! Excuse me sir!"
Laura
"Don't ask me why that thought never occurred to me before then, but for some reason, in that moment, my perspective changed."
Em
"Part of the deal I chose, I guess."
Nie Nie
"My heart cracked open and for a few minutes, she became mine"
Lizdom
"...every single fear I have about failing as a mother comes up from my bowels and heart and out of my mouth and eyes..."
Maggie May
"...we are careful with our magic, and we wrap it in paper to keep it safe."
Miss Maybelle
"Shine your light, motherfuckers!"
Sarcastic Bastard
"we're all trying to find a nice comfy place to cope. someplace not too scary and not too safe."
Jordana
"Don't worry. It's going to be ok. It's going to suck. You'll be smashed to smithereens. You'll be built back up again. You'll be more YOU than you'd ever imagined. It's going to be ok."
Cristin
"abracadabra is from the ancient hebrew 'avarah k'davarah'... what i speak, i create."
Adrienne
"You are both damned and saved, all the time, in every moment"
Scott

just spit it out